As many of you will know, Birmingham is home to the wonderful River Rea and its tributaries and wildlife. Not so many people know that it has a poem! This ode was written in 1998 by Harry Reeves, and I believe you can buy hard copies of it at the Lickey Hills Visitor Centre. Parts of this ode are featured on the notice boards along the river.

I've lifted this straight from the River Rea Trail website but I fully recommend you go and have a nosey through it all, lots of information relating to the Rea!


On Waseley Hills in Worcestershire a little river rises,
It isn’t much to look at, but it’s so full of surprises,
To many folk it’s not well known, which seems to be a pity
For on its banks near Deritend began our Second City.

The river is of course THE REA which flows into Brum’s heart
Since Saxon times to present day its played a vital part.

From Waseley Hills it flows north-east and heads for Gannow Green
Then Frankley, Rubery, Colmers Farm where Callow Brook is seen,
On, underneath the Rover Works the Rea makes steady flow,
To local folk ‘The Austin’ works is still the name they know.

From Longbridge through to Daffodil Park and then past Kalamazoo,
The Impey family founded it with loose-leaf binders new.
Through Mill Lane Fields the Rea flows on, once corn mills graced each end,
‘twas ‘Hawkesley Mill’ near Kalamazoo and ‘Northfield’ by the bend.

Now underneath the railway line as Northfield comes in sight,
And by the side of Station Road, Rea flows on day and night.
Soon on to Wychall reservoir past rolling mill long gone,
But then Kings Norton Church appears with spire to gaze upon.

So on to Lifford we must go, cross Worcester Canal with river below,
Then Tollhouse Junction and Guillotine Lock,
on Lifford Hall should we dare to knock?

Another reservoir appears and Lifford is its name;
‘twas built two hundred years ago and Wychall was the same,
Canals were being opened up with navvies toil and sweat
More water still was needed now to keep the levels set.

Canals did take their water from the nearby River Rea,
but millers were not happy and protested all the way!
In the year of seventeen ninety our Parliament passed an Act
To store supplies of water, which everybody backed
Those reservoirs provided that water night and day,
Canalmen now felt happy, as did millers on the Rea!

To Fordhouse Lane and Hazelwell where corn mill once stood proud
And on the bank a millstone lies, mid bushes on the ground,
The walkway and the cycletrack now pass on either side -
It’s good for people to enjoy a walk or family ride.

The Pershore Road’s not very far with traffic night and day,
But as you walk the valley’s banks it’s quiet by the Rea.


At Cartland Road the Rea is joined by a stream that’s called ‘The Bourn’
It started life as Merritt’s Brook, then Griffin’s Brook was born,
But as it flowed through Cadbury’s works did George call it the Bourne?

Through Stirchley now to Selly Park where Moor Green Woods are seen
With joggers and ‘doggers’ and mothers with prams, enjoying the peaceful scene,
Here kingfisher and heron live and little fishes too
Just looking for their daily food, as many creatures do.
With Queen Anne’s lace and Campion the hedges all abound
And on a wet and marshy site the kingcup can be found,
Whilst Himalayan Balsam, is this the Ranger’s friend?
Just springs up as you walk the banks, on going round a bend.

What is that in the distance?, that building I can see
Ah, now I know, It’s Pebble Mill and the well known BBC,
I wonder if Carl Chinn is there, still getting little rest.
But telling all the world around that Brum is still the best!

The Nature Centre’s our next stop, as we go on our way
And here another little stream runs down to join the Rea.
This is Bournbrook and not the Bourne. To some it seems confusing
But as it flows past Pebble Mill the brook finds this amusing.

Inside the Nature Centre, it’s fun for many a child,
The animals can’t stray away, but do still roam quite wild.
There are fox and lynx and beaver, with sheep and goats and deer,
While birds, and snakes, and insects are studied without fear.

In nineteen hundred and twenty seven a thunderstorm did break,
It was a summer’s evening , the ground looked like a lake,
The Rea was flooded all the way from Longbridge into town
And streets turned into rivers, as the rain came pouring down.

In Austin works and Kalamazoo the floods did leave their mark
And bread and milk were brought by boat to folk in Selly Park,
Allotments in the valley had sties where pigs were kept
But when the river burst its banks the pigs down stream were swept.
Near Bristol Road at Longbridge, a man in a hut was found,
The hut was wedged beneath a bridge, but he was safe and sound!

The Cricket ground was flooded with water from the Rea,
And pictures in the local press showed bike sheds washed away!
But now there is a cover, ‘Brumbrella’ is its name,
It takes the water from the pitch - down in the Rea to drain!

Deep into a culvert the Rea had to go
Because of that flooding so long ago,
Between its stone walls into Cannon Hill Park
With weirs to flow over to make it less stark.
But the walls are not barren to those who are keen
For if you look closer moss and lichen are seen.

Louisa Ryland gave the park in Eighteen Seventy Three,
Its brought much joy to many folk, and most of the time it’s free.
The flowers and trees are beautiful, at all times of the year,
But if you walk back through the park, wild meadows soon appear.

The MAC is busy everyday, with Drama, Theatre, Art
While August brings a fireworks show and music plays a part.
There are horse parades and puppet shows, boating and fishing too,
Whenever you go to Cannon Hill, there’s something to see and do.

Now it’s under the road into Warwickshire’s ground
For Edgbaston cricket the crowds are all bound,
There’s a stand by the river, ‘Rea Bank’ WAS its name
But it’s now Eric Hollies, of late bowling fame.

Inside its concrete collar the river still flows on
Through Calthorpe Park to Balsall Heath,
Where have the ‘ladies’ gone?
And then we come to Belgrave Road, to the ‘Bristol’ folk can’t go,
But up the hill the Mosque is seen whilst the Rea is down below.

So now it’s under Gooch Street that the Rea is flowing on,
And then on into Rea street with memories long gone.
For there you’ll find the places where many a workshop stood
And men did toil with sweated brow - conditions were not good.
It was the birth of industry when metal trades held sway,
And if you walk along those streets, you’ll find some there today.

At High Street Digbeth, long ago, men met to trade and barter,
And in eleven sixty-six, King Henry’s Market Charter.

In April sixteen forty-three the Battle of Brum was fought,
Prince Rupert came down from Camp Hill and caught defenders short.
He came to punish Birmingham, whose mills were making swords,
And crossed the Rea at Deritend with all his fighting hordes,
They overcame defenders there and put them all to flight
Then up the hill his forces went to set the town alight!

“Grey willows whispered by the Rea
where lovers dreamt and children played in clean fields on a summer’s day”.

‘Twas over the Rea in Floodgate Street where that place was described
And here we think Beorma’s folk, a pleasant spot espied,
They settled near the river’s brink with fields and woods nearby,
Was water from the Rea itself then pure enough to try?

To people passing up above the Rea cannot be seen,
It is a secret river , and we try to keep it clean
But if the Digbeth plans take shape and start to make their way,
We hope the next millennium will, revitalise the Rea.

Road bridges could be opened up to let the people see,
There is a river down below that’s flowing to the sea.
Now what about a walkway with flowers and plants and trees?
And wayside pubs and cafes, where folk could take their ease.

Bird’s Custard Factory still stands there, its front well worth a glance
But at the back it’s full of life, with art and craft and dance.
The old Crown Inn’s just up the road now looking very well,
If its past history was revealed what stories it could tell.

So on we go to Fazeley Street, ‘Grand Unions’ overhead
You can walk the ‘cut’ to London Town, or take a barge instead!

Now the Rea is hidden, in a culvert dark and deep,
But ‘neath the rails of Curzon Street, the river does not sleep.
It flows on to the Heartlands where life begins anew
Canal banks are now lively, with buildings bright and new.
Perhaps I’m only dreaming with hope still in my heart
But could the Rea itself be raised, to play a vital part?

Spaghetti now looms nearer, it’s just by Nechells bend
The river is still flowing on, but near to journey’s end.
At last the River Tame is reached , which takes us to the Trent,
Due North it flows to Humberside, its waters nearly spent,
And now it turns towards the East, it’s plain for all to see -
The Rea’s arrived at journey’s end, out in the Great North Sea.

From humble start in Waseley Hills, the Rea has reached the sea,
But on its way as you have heard, its shaped Brum’s history!

We formed a conservation group, to make all folk aware
The City has a river and it’s there for ALL to share.
It has a pleasant valley too with walks and cycle tracks;
We’ve planted trees and bushes there, and filled up litter sacks.

We try to make it greener, and help to keep it clean
But cans and cars and trolleys are dumped upon the scene,
There is a linear walkway, and cycling’s made its mark -
One day, we hope, it will become, Rea Valley Country Park! 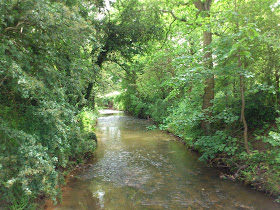